The fireworks have been going fast and furious yesterday and today.  Mai calls it a special “Buddha Day”.  What it is is the end of Vassa, or Buddhist Lent.  Wikipedia says:

In English, Vassa is often glossed as Rains Retreat or Buddhist Lent, the latter by analogy to the Christian Lent, which Vassa predates by at least five centuries.

Vassa is followed by Kathina, a festival in which the laity expresses gratitude to monks.  Lay Buddhists bring donations to temples, especially new robes for the monks.

The Vassa tradition predates the time of Gautama Buddha.  It was a long-standing custom for mendicant ascetics in India not to travel during the rainy season as they may unintentionally harm crops, insects or even themselves during their travels.

A Glimpse of Buddhist Lent

Mai has brought in some tiny flowers which will be placed at our own little shrine mounted on the wall in a corner of our living room (next to our portrait of the King).  After that she prays for a minute and meditates for a while, then it’s time for bed.

The end of Vassa corresponds with the end of the rainy season in Thailand.  I noticed a dramatic difference when I returned from my trip to Canada on October 2nd.  Mai told me it hadn’t rained for the past 4 or 5 days, and the rain-free streak continued for another 2 to 3 weeks.   Quite a change from before I left, when it rained almost every day.

I mentioned before that our kitchen is open to the outdoors, and as a result we have geckos climbing the walls looking for bugs, tree frogs also looking for a meal and even the occasional sparrow!

Almost all Thai washrooms are equipped with a handheld shower head, installed next to the toilet to, umm…help with the cleanup!  Simple and fantastically effective.  Yesterday, I went to our washroom to perform a function that didn’t require the use of the shower head.  Good thing!  Parked right on the shower head was the centipede in the photo below! 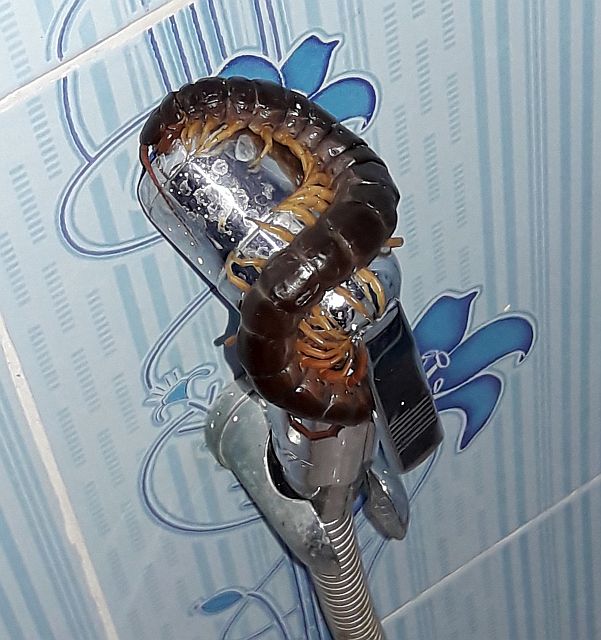 This “little” guy is a good 6 inches long and I heard they have an extremely nasty, venomous (but non-fatal) bite.  Mai said she was bitten by one years ago.  Her hand swelled to the size of a hardball, was very painful and stayed that way for a week!   Yikes!

It turns out it’s also snake season!  I’ve seen 3 or 4, always on the road when we are safely inside a vehicle.  The ones I have seen were all pale grey-blue and about 1.5 metres long.  I don’t know what kind they are, or whether they are dangerous or not, but I’ve never been a big fan of snakes and give all of them a wide berth!

Feel free to comment on anything you see or read.
You can Leave a Comment using the link below.

I retired after a 30-year career with an engineering consulting firm in Toronto and recently moved to Thailand to marry my fiancee of 10 years and settle down to an exciting new life. I'm an amateur radio operator (VE3HLS in Canada) and hope to become on here eventually. I'm also an amateur photographer and hope to be very busy photographing and showing you my beautiful surroundings. My blog will contain entries on all three subjects, so I hope you don't mind picking through the boring stuff to get to what interests you. Oh. About bueng-ken.com. We live in Bueng Kan province, which is about as far as you can get from Bangkok as you travel northeast. I just thought it would be clever to combine my name with the province's name! View all posts by buengkenalexander

One thought on “Buddha Day”